skip to main | skip to sidebar

DISCHARGE-Live at the Farm in S.F. Sept 7th 1986(getting heckeled)) 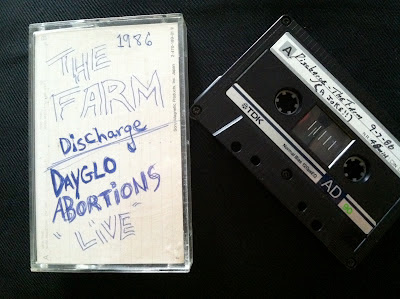 This tape being uncovered I owe to my friend Kevin 'O who I gave the only copy to well over twenty years ago.  He was nice enough to save it, and recently sent it back to me.  My guess is that if I would have kept it, it would be lost in a sea of tapes, or given away to someone else.  I wish I still had the Possessed, and A.A. sets from the gig on tape... they are lost in a sea of tapes for sure.
The tape is from 1986 at the Farm in SF.  It was the last show Discharge played after touring the U.S.A. on a their sell out LP.   I had no idea that they had put out a bad record, and were touring on it, so me hearing them sounding like this was a complete shock.  I was ready to hear the classic Discharge... I can be heard talking to another dude standing next to me about how they sound worse then Ratt, and wondering if anyone from the Orig lineup is even in the band.  They really were horrible, and within the first song you can hear the crowd chanting fuck you.  Within 10 mins in they give up playing, and for the next 30 mins, random dudes come out on stage to yell at the crowd, and tell them the cops are coming, and that we are closed minded assholes.  Andy Anderson(Attitude Adjustment), and Scotty Verbal Abuse are some of the randoms talking the crowd down.  Seriously a great memory.  The entire farm chanting DRI, DRI, DRI, DRI...In hopes that DRI who had opened would come back out and play.  Turns out that when Discharge came back out to give it another go, DRI walked up with a trash can full of garbage and threw it at the band.  Members of the band were actually crying because of the reaction.  Years later My friend Jim MacNaughton told me he saw them at La'Mar or something in NY, and the same thing happened.  That would have been at the beginning of the tour.  Hard to believe they toured like this. The recording was done on a little walkmen type tape player, but sounds awesome.  There are only a few songs played, most the time of this tape is the great banter by roadies, and SF scene dudes.  Pretty sure nothing else in the world exists like this. Enjoy the download 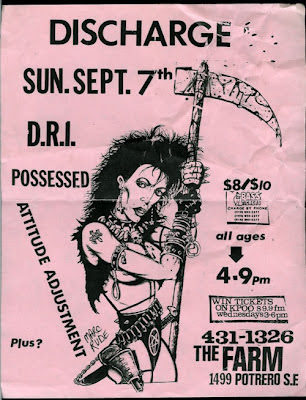 If you are a band member, or label that takes issue with anything I've posted please touch base

myself, Weiss, Will, Pat West, Artie

Other blogs & sites I dig

Friends Who Rock(follow this site)